Bahrain - Insight and inside

Bahrain is a small country in the Persian Gulf. It is an island with an area of 665sqkms and a population of about 720,000. Males outnumber females by a small margin. The population growth is 1.34%
Foreigners constitute nearly one third of population, mainly from India and Philippines who are the working forces for mid and low level cadres. Main languages spoken are Arabic (majority) and English.
Oil reserves in this country is scarce, therefore country largely depends on tourism as well as petroleum processing and refinery. The capital city, Manama, has large number of new hotels, and most of the times are full, Saudis are among the leading tourists to the country thus boosting significantly the country income, they use the bridge erected across the sea to join these two countries. I was told by one taxi driver that the Saudis basically they come to relax during the weekends, and get spoilt by Alc and Pro which are forbidden in their country. Therefore if you like boozing, come with full purse, as each unit of alc is expensive here.
The kingdom of Bahrain has been expanded through land reclamation, where seafront is replaced by soil paving space for new buildings.
There are some narrow streets which resemble stone town in Zanzibar, this is old Manama, and most of Indians live in this area.
Generally the country is clean, however I was astonished to see broken bottles, food leftovers, cellophane papers scattered along the new beach.
According to Bahrain rules, all drivers in public transport have to be Bahrainis, thus, 100% of taxi drivers are Bahrainis. They are clever, as all negotiations they make are aimed to get more Dinars from the customers, and if you are not careful, they add 1-2 Dinars (3 – 6 USD) on the meter. The drivers are very thankful if you give them tips, You should remember that their currency is stronger than Euro, US dollars, Pound sterling etc, therefore any tip you want to give, you should make a quick conversion, as you may regret later to realize that the tip you offered was twice the actual fare.
On our trip, the driver initiated a negotiation before we start our journey to pay him 10 Dinars for the whole trip; we decided to follow the meter. At the end of our trip, the final cost came to 6 Dinars. That means we saved 4 Dinars (12 USD) in one trip when we refuse that negotiation. My friends, who were clever enough to keep an eye on the gadget at the start of trip, on arrival taxi driver, increase the fare a little more than on the gadget, when he was asked why he had increased the fare, He excused himself and said because they had many pieces of luggage. Well, he received neither a tip nor the word “shukran” (thank you), as my friends were already adamant! Wouh!
Something new for me, I noted that our flight were predominantly by young ladies mostly teens and early twenties. The last flight, on my way back, out of all passengers (more than 100), we were only 10 gentlemen, both in business and economy classes, and it was easy to locate gentlemen as we were all offered seats at the emergency doors! The rest of passengers were under 25 ladies! Probably they are vigorous wajasiriamali (Legal petty business ladies).
Posted by chib at 31.3.09 No comments: Links to this post 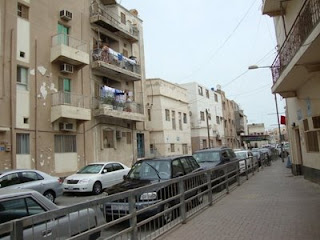 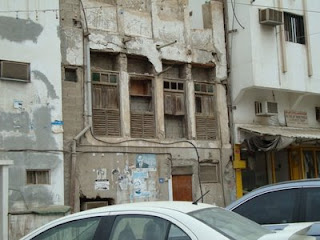 This is Old Manama as they call it, I was busy walking around to explore the city and landed here, where streets are narrow, and other are for pedestrians only. 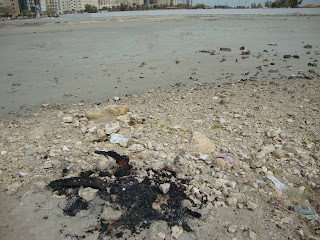 Used firewood, broken glasses and debris at the new beach 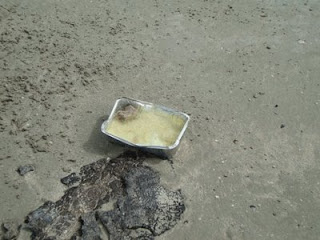 Food leftover left on new beach
Posted by chib at 31.3.09 No comments: Links to this post 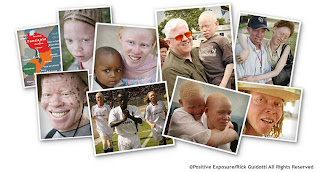 Sorce: Under the sun

It is very sad to see how albinos are killed in Tanzania with a belief that their body parts have magical power by making somebody very successful in business and eventually become tycoon. Little have been done so far to protect them, and those who were caught up with albino parts, no one has ever been convicted despite that this act has been in the country for more than three years.
Albinos in Tanzania have been neglected in almost all social sectors despite their numerous problems which are well known by the government. It is said the average life expectancy of albino in Tanzania is 3o years, while in developed countries, is as same as general population.
If you want to learn more about albinos in Tanzania and how people outside Tanzania say about this problem read www.underthesamesun.com/home.php
Posted by chib at 30.3.09 No comments: Links to this post 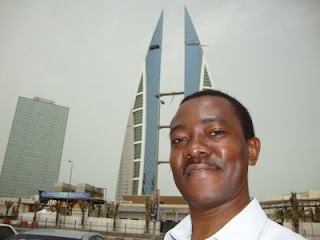 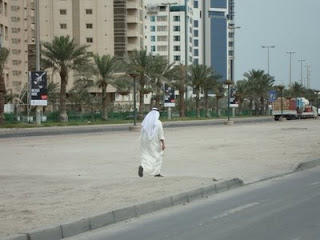 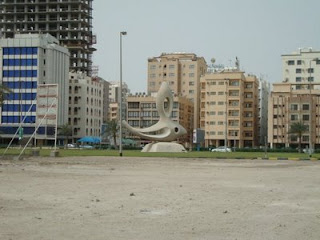 Some of exciting areas I visited.
Posted by chib at 30.3.09 No comments: Links to this post 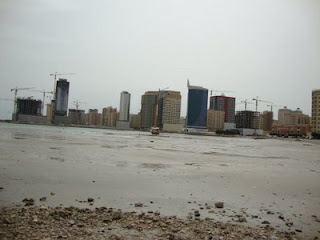 New constructions on progress at the reclaimed land. Most of these new buildings are hotels and luxurious apartments
Posted by chib at 30.3.09 No comments: Links to this post 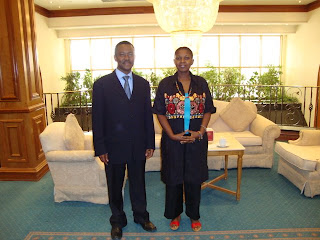 With Dr Anna Sanyiwa at the Gulf Hotel, Manama
Posted by chib at 26.3.09 2 comments: Links to this post 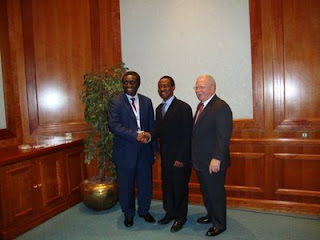 Shaking hand with Daniel Et'yale from Geneva(WHO) and on my left is Bruce Spivey, the president of International Council of Ophthalmology based in USA, this was after intense leadership training in Bahrain. 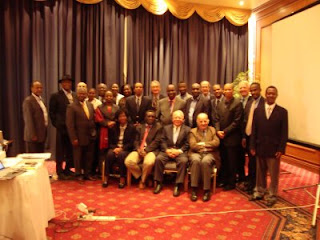 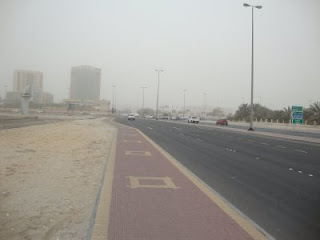 This is a part of reclaimed land in Bahrain. In the past, this area was filled with sea water.

Salt is widely used in the world.
It is said that salt has more than 14,000 uses, which includes medical therapy, preservative, antiseptic etc.

Among the known commonest use of salt includes, to add taste on food we eat, preservatives of meat and fish, medical treatment like chronic obstructive and restrictive lung disease by which in some research done in Germany, those people suffering from chest problems, when spends about one hour in room filled with salts, has proven to give much more long standing relief from symptoms of chronic lung diseases. In actual fact, saline clinics are becoming more popular as alternative treatment for chronic chest problems.

Also it has been said that in case of anger, anxiousness, low mood and loss of self esteem, salt is the best remedies to overcome such stresses and making somebody’s day, however, people with high blood pressure are not recommended to take excess salt . it actually make the situation worse.

During ancient time, salt was widely used in barter trade, where Arabs were exchanging in equal volume with gold from Ghana. (What an exploitation done at that time!!)
Also, salt was one of commodities believed to be holy and bring lucky, some priests had used salt in baptism. In Swiss, men they kept salt in their pockets believing that it helps to maintain their marriage, similarly in Germans, the brides used to put salt in their shoes for the same purposes.
Posted by chib at 24.3.09 No comments: Links to this post 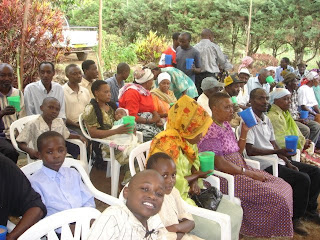 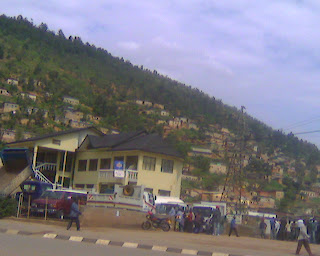 This photo taken at Nyabugogo, Kigali city near the main bus terminal, reminds me the place where I grew up, Mwanza. Which has similar kind of houses on hill side with no roads and full of "passport" size toilets. Sometimes this kind of dwelling habit is hazardous to health.
Posted by chib at 20.3.09 No comments: Links to this post

I CARES ABOUT EYE CARE 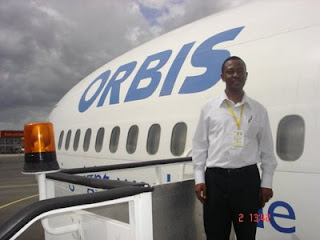 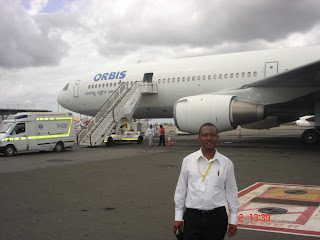 Eye sight restoration, that is my basic job which I have been and still doing todate. Travelling and provide my service right at the spot, has been part of my carrier, and I like it.
I had an opportunity to join ORBIS in their ever largest plane well equiped eye theatre and conference/lecture theatre which can take up to 50 people. It was an amazing experience.
Posted by chib at 20.3.09 No comments: Links to this post 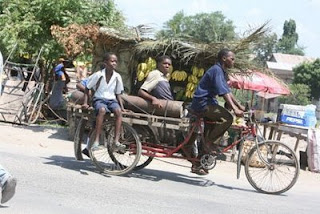 This month the Government of Rwanda announced new visa and work permit fee regulations that exonerate East African Community (EAC) citizens from the latter and, reduce those for all other non EAC.

This comes after it was announced last year that professionals from regional countries would get visa waivers as part of the country’s goodwill towards regional integration as well as improving the service sector.

A cabinet meeting last month endorsed several resolutions, including decrees relating to foreigners’ employment and entry and stay in the country.
Also clarified in the communiqué is that work permits are in two categories – A and B, foreigners whose monthly gross remuneration is “at least” RWF 500,000 (USD 880) and others whose monthly wage falls “below” RFW 500,000.
Annual work permit fees will change from Frw 200,000 to RWF 50,000 for category A and RWF 10,000 (USD 18) for B.
Outlined in the new regulations as well is that foreigners “coming to work or reside in Rwanda” and have paid for a work permit are exempted from resident visa fees.

In addition, resident foreigners “shall no longer be required to pay any deposit fee,” the Directorate underlines, besides cautioning all country employers to “follow these regulations.”
President Paul Kagame first announced this waiver in 2007 during the Commonwealth Business Summit that preceded the Commonwealth Heads of State and Government Meeting (CHOGM) that took place in Uganda that year.
Posted by chib at 18.3.09 No comments: Links to this post

When a pet become pitty

Recently there was bitter complaints from employees of Zamani Zanzibar Kempiski hotel directed to a pet(dog) belongs to one of the foreigner boss.

It was said that, the pet was always accompanying the boss every where including at the hotel premises (office), it was further said the pet was also "attending" staff meeting with the owner which make the local staffs stunned (consider that majority of Zanzibaris are moslem), as the dog was allowed to feed on tha same plates which was being used by all staffs, this was found to be unbearable.

It was further said, people were not happy from the habit of a dog liking sniffing their legs and sometimes smash them around gently(mind that the pet is "he" dog). People were more adamant when they were told to apologise to the dog when they slap "him" when the pet "smashing" games were beyond individual tolerance.

The owner eventually decided to flew the pet back to New York, claiming he want the pet to go and rest, because people are complaining unnecessarily!
Posted by chib at 15.3.09 No comments: Links to this post

Museveni: His Kingdom and kinship

I was trying to speculate a dubious and nepotistic King Museveni’s strategies in ruling his new Uganda Kingdom which he had been building it slowly and strategically.

I was very much interested when I read several articles about him and the one which attracted most was The independent magazine which had an extensive Museveni achievement in ruling Uganda by investing in the national army and in his own clan.
Among the 23 national army top commands, 74% come from Museveni’s western region.

I am still asking myself, whe he fall out of power, what will happen to the Kingdom and "kinship" he had built?
Or, does that signify he prepares himself to rule until he lost his last breath in this world?
Posted by chib at 12.3.09 2 comments: Links to this post

There is no useless human being in this world. Even in vegetative state, one can provide earnings to other people for care and medics. Also play an important statistical data of the living creatures in the world.
Posted by chib at 9.3.09 No comments: Links to this post